Ladies and gentlemen!
Please, confirm your age of majority.
So you agree entering enogastronomic club “Mozart Wine House” and get access on a site.

This site contains information which has not been recommended for persons, not reached full age of 18 years. The data placed on the site, have information character and are intended only for personal use. 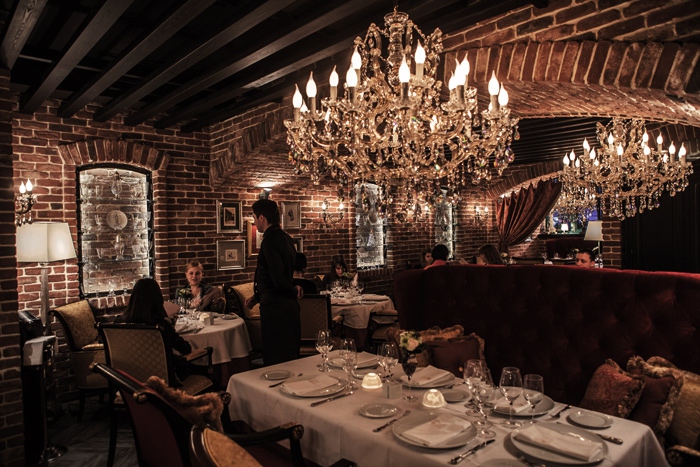 Do you feel? In the air, as a breath of delicate flavor of France — to the wine restaurant with an original title «Pinot Noir», situated on the street Pushkinskaya, 25, Michel Christmann arrived. He is an infinitely talented person with unique culinary skills, a true master of his craft, whose true vocation — high gastronomy.

Upon entering the restaurant, you will immediately notice the refined atmosphere: walls, lined with brick Belgian rarity, a large mirror of the early 19th century, imported from Italy, the chandelier in the Renaissance style of the famous Florentine manufacturer, handmade Milan luxury furniture, made by special order, which, no doubt, perfectly complements the interior of the restaurant. Graphics from Austria, Germany and France, antique prints and watercolors since Napoleon ...

But, the most important thing, of course, is the kitchen! Authentic and original recipes developed on the basis of only the highest quality products and delicacies (foie — gras, truffles, marbled beef ...) that are delivered twice a week by plane by special order.

Sure, lovers of fine cuisine will appreciate the high quality and performance of the original author’s dishes, as well as excellent service with the highest European standards.

It should also be noted that in the restaurant’s wine list you will find more than 200 wines at more than good price. Gastronomic combinations — the basic concept of the restaurant. Each dish is perfectly matched wine. Combinations give rise to new tastes, experiences a force that can not be forgotten!

Michel Christmann agreed to answer a few questions that allowed us to learn something about himself, his professional experience, aspirations and future plans.

— Monsieur Christmann, please tell us why you decided to become a chef.
— I decided to become a chef after leaving school. I’ve always liked the kitchen because since childhood I watched my father, which cooked a lot. He always gave me to try. I remember the taste of fresh vegetables, which he took directly from our garden. I’ve always wanted to help him, and when I grew up, I was constantly with him in the kitchen. Then I’ve got va chance. I got an internship at the restaurant of the highest level (the restaurant «Crocodile» in Strasbourg, which has three Michelin stars). There I learned a lot and realized that the kitchen — it’s really what I wanted to do my whole life.
— What influenced the formation of your own culinary style?
— First of all, the French terroir. In France there is so many great products! I love to experiment, mix them to end up with a unique taste, texture and beautiful from an aesthetic point of view.
— Who do you consider to be your professional mentor?
— For me, this is definitely Eric Freshon — chef at the hotel «Bristol» (having three Michelin stars), (he awarded the title «Meilleur ouvrier de France» (literally «Best Worker in France» — an award, which honors winners of the competition held among professionals in higher category by the Ministry of Labor)). It is for me a constant example in everything.
— What attracted you for going to Russia?
— If it were not for my partner’s suggestion, perhaps I would have never thought about moving in Russia. I found it interesting to try and educate people here who have, unfortunately, no way to get a culinary education, as in France. And, of course, I wanted to discover a completely new country, which is not like France. It’s also a great opportunity to introduce Russian people with authentic French cuisine.
— Are you afraid of losing your culinary personality, leaving France?
— No, absolutely not. On the contrary, I hope that with my partner, we will be able to raise the restaurant Pinot Noir to a whole new level. I’m sure I’ll find new ways to express themselves and will only grow.
— What is your ultimate goal in the profession?
— The most important thing for me — never rest on the same level, always evolve, look for new solutions, methods, and one day to achieve the highest level and open my own restaurant. And then, perhaps, I want to add some fun to their activities and begin counseling.
— How do you think you can surprise Rostov people?
— I think I can surprise Rostovites by my exquisite, unusual and delicious kitchen. I am sure that in Rostov there aren’t such restaurant. And I would like to open for Rostovites the kitchen that could be completely new, unknown to them before. I’d like to satisfy their gastronomic and aesthetic desires! Guest must be pleasantly surprised by what he sees and tries, as he goes to the restaurant to get a new, incomparable emotions and simply have a good time.
— Each chef has his professional secret. and you?
— I have no a concret secret, but thank to my education, creativity and perseverance I try to do the amazing and high-quality cuisine. My secret, perhaps — to be stubborn and strict with yourself, do not stop!

2019 is promising vintage but yield drops across Chile, temperature highs and water lows has impacted the yield. Coming off of the back of what many consider the best vintage of the last decade, 2019 was always going to suffer in comparison.

Adelle ‘Boots’ Brounstein, co-founder of Diamond Creek Vineyards and one of the pioneering generation of Napa Valley wine producers, has died at the age of 92.

Some winemakers are calling 2019 their best vintage of the decade, but market woes and a cooler climate meant a slight drop in production compared to last year.